I was recently asked by pair of supportive collectors to revisit a series I began a few years ago.

The latest in the Icon Series is based on, American Icon and Muppet, Sam the Eagle.

Sam occupies a unique place in the wacky crowd that is the Muppets. He stands in as the ironic voice of conservatism and reason against the backdrop of frenetic chaos.

Some of my first memories of the Muppets involve Sam as a disgruntled participant  in the Tit Willow song, deadpanning the part of the Dicky Bird — I had it on vinyl for my Fisher Price turntable.

I feel that Sam was kind of the vehicle for the writers to speak slyly against censors and non-progressives in a way that was smart, funny, wry satire before The Daily Show and, ultimately, The Colbert Report perfected it.

In a double-headed manner Sam expounds the necessity of “the noble eagle, the good old values, the wisdom of the Founding Fathers” in a way that is seen by certain political groups– albeit with out the irony. 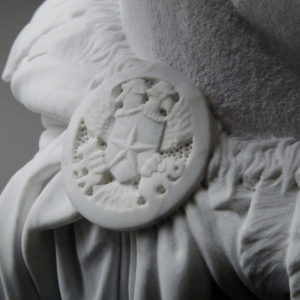 Throughout Sam’s tenure as a kind of disapproving-uncle-figure he avoided ever becoming a villain (more recently playing the role of a hero in the latest Muppet movie). So I chose to depict him in the style of Emperor Hadrian, one of the more benevolent (relatively speaking), if not initially bumbling, rulers of the Roman Empire.

Sam actually appeared for the first time in 1975 in the second Muppet Show: Sex and Violence, the series’ second pilot. Note: in the background, often over Sam’s right shoulder, there is a marble bust that is conspicuously attired with random bits of costuming each time it appears in the shot — hah!  Classic! 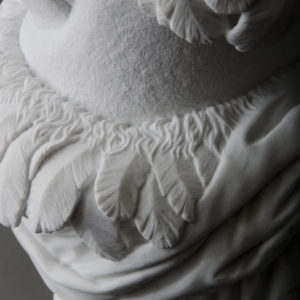