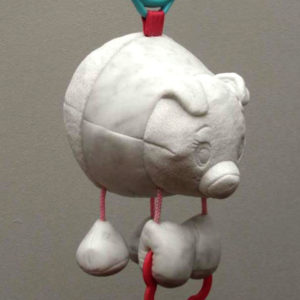 This second “Birthstone” is based on the beloved former toy of a couple’s small child.

The original “Piggy” was literally loved-to-death. The little tike pulled on Piggy’s music string so many times that the once cheerful tune morphed into a kind of “funeral dirge,” according to her father. Since the original Piggy had been replaced with a new Piggy, this allowed me the opportunity to not only make a sculpture based on an object with personal significance, but one that actually incorporated artifacts from that object.

This piece presented a lot of structural and aesthetic challenges.

The chance to make a stone sculpture that didn’t just toy with the concept of the base, but which completely removed it, was just too good to pass up. So while the process took far longer than anticipated, it is always pretty cool to do something experimental. Any time spent developing new methods and techniques is always well worth it. 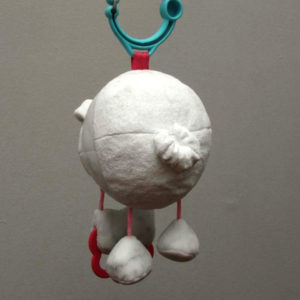 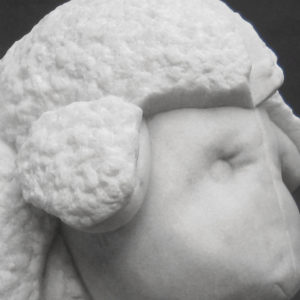 Through my personal and professional work as a stone carver I have spent quite a lot of time working on and ruminating over the concepts of memory, memorialization, loss, death and remembrance. If these subjects seem dour to you — I agree.

In anticipation of the birth of our first child I have, of course, been thinking more about the beginning of life rather than its end. Believe me, it’s less depressing. This thinking led me to question why we spent so much time and money making memorials about the cessation of life, rather than it’s beginning. Why not make memorials and artwork to our excitement about a life just beginning, as opposed to a life just ending?

The Little Lamb is the result of my excitement about the birth of our first child and my absolute inability to think about anything else in my studio. 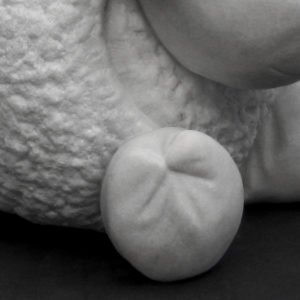 The subject is taken from the very first and only stuffed animal that we bought during those early days of pregnancy. A time when we were equal parts excited about what we hoped was coming and trepidatious about whether or not things would all stay put and develop as expected. At this time, when we, of course, did not yet know the gender of our future child, I found myself unable to truly conceptualize our child as a human.

Many parents find it more comforting to picture their “it” as a more visually and psychologically pleasing little object or animal. Via this act of reverse-anthropomorphism, these little fetuses garner nicknames (which often carry into infancy) such as Little: Moose, Lion, Sweet Pea, Bean, Peanut, Gummie Bear, Dragon — or in our case — Lamb.

Though I do find the concept and act of memorializing and paying homage to those whom we have lost an important and solemn duty, I can surely say that it is far more uplifting to carve a Birth-stone rather than a Tomb-stone. 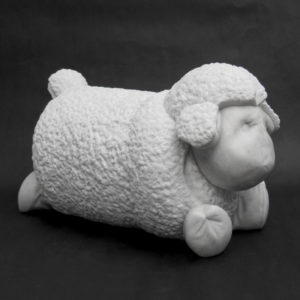 In 1972, the Renwick Gallery of the Smithsonian American Art Museum was created as a home for arts, crafts and design. Four decades later, the gallery is celebrating the evolution and happy confusion of those disciplines in a show of the work of 40 artists born in the last 40 years.

Organized by Nicholas Bell, “40 Under 40: Craft Futures” focuses on themes like sustainability, sampling and the spirit-nurturing qualities of handwork.

Objects on display include Sebastian Martorana’s “Impressions” (2008), top left, a marble pillow permanently imprinted with the shape of the artist’s deceased father-in-law’s head, and Christy Oates’s “Crane Chair” (2009), bottom left, a functional seat that folds flat and hangs decoratively on the wall when not in use.

Rather than obsess over labels, the artists’ attitude is “I just do what I do,” Mr. Bell said. “It’s refreshing to see people abandoning language that we’ve been using to express ourselves over the decades.”

Please follow this link to view the article on The New York Times.